Forced to dig holes for days, Stanley learns a lot about the mysterious history of Green Lake and even more about what it means to be a good friend. With the help of Zero, some lizards, and characters of the past and the present, Stanley will do whatever it takes to prove his innocence and reclaim his family’s name. 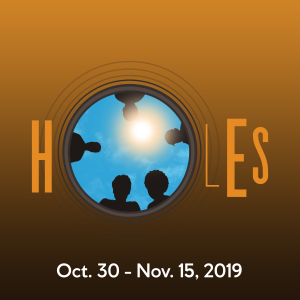 Approximately 75 minutes long with no intermission

Holes is an exciting play being offered at LCT this November! For this, I took my 8-year-old with me, and we had a great time! While waiting for the play to start, we scanned the stage to find all the yellow-spotted lizards. Every play at LCT begins with a clever way of reminding the audience to turn their phones down, not to take pictures, and thanking their sponsors. They somehow manage to do this in a manner that almost seems as if it’s a part of the play!

Throughout the performance, there are three main stories: the story of Stanley Yelnats IV, that of his Grandparents (the original Stanley and his son), and last the tale of Kissing Kate Barlow.

When Stanley IV is sent to Camp Green Lake as punishment for a crime he was wrongly accused of; he expects to finally get to experience a summer camp that his parents can’t afford. Instead, he encounters bullying, hard manual labor, and even friendship. He continually refers to the bad luck the men in his family experience thanks to his “no good dirty rotten pig stealing great-great-grandfather,” and eventually, the audience gets to see just how Stanley I got his name!

We especially loved the complexity of this play. Rather than tell each story individually, they instead coincided with one group of characters in dimmed lighting quietly acting out their parts while the other group was highlighted and continued speaking. This method was a little advanced for my 8-year-old as he repeatedly asked why the actors didn’t appear to see some of the characters. There are some loud bangs, screams, and quite a few deaths, which is why I suggest following the recommended age of 9 and up.

This is one of LCT’s Discovery Show for the season, meaning: “it is a show about young people, performed by young people” and also includes adult members of the community.  From the boys at Camp Green Lake to the townsfolk of Green Lake, each cast member is convincing in their roles. The Warden (Catherine Gaffney) and Mr. Sir (Adam Luckey) are delightfully terrible (so much so that my son refused to get their autograph!). Kissing Kate Barlow (Courtney Joy Miller) and her romance with Sam (Monte Freeman) is not only tragic but without their story, poor 14-year-old Stanley would not have the chance to redeem his family!

The heckling and bullying from the boys at Camp Green Lake made for great conversation on the ride home. A great chance to chat with your kids about bullying, prejudice, and family. We loved seeing the friendship develop between Stanley (Ethan Norris) and Zero (Garrett Brady Addams) and the surprising way in which their fates were linked. And while Stanely and Zero get a happy ending, that is not the case for everyone in this play.

Don’t miss your chance to see this performance as it’s not only entertaining but addresses some real issues being faced by kids today. When we left, my son had lots of questions about things he noticed in the play, which made for some great conversation on our drive home. I plan to chat more about it today and this week as it’s an excellent opportunity to discuss ways to combat bullying, racism, and injustice.

Holes is one of our Discovery Shows for this season, which means it is a show about young people, performed by young people. As LCT transitioned into a fully professional theatre, we began our Discovery Series in 1995 as a way to continue providing challenging performance opportunities for our young actors, encourage and mentor students in the many areas of technical theatre, and keep runs of our shows shorter so students would not have to miss as many days of school. Discovery Shows are always open for Lexington community members – children and grown-ups alike – to audition to be part of the cast or technical crew. So you might see a few people you recognize on stage or behind the scenes!

Holes is based on a bestselling, Newbery Medal winning young adult novel by Louis Sachar. This story includes three intertwined epic stories, all connecting back to one unlucky boy: Stanley Yelnats. Stanley, a boy infamously known for being in the wrong place at the wrong time, is accused of stealing a pair of sneakers worn by famous baseball player Clyde Livingston. He blames his misfortune on his family curse that has befallen all men in the Yelnats line – all because his great-great-great-grandfather didn’t keep a promise to a fortune teller named Madame Zeroni. Because of his “crime,” Stanley is sentenced to Camp Green Lake, a juvenile detention center, the backdrop of an unsolved mystery and buried treasure.

The second part of the story, one of love and tragedy between Sam and Kate, takes place in 1888 in the town of Green Lake.  Kate is a white school teacher in the town, and Sam an African-American onion seller. While Sam repairs the schoolhouse, their friendship blossoms into love and they share a kiss. However, in the 1880s, due to deep-rooted beliefs about slavery and racism, interracial relationships were illegal, and Sam is killed for kissing Kate. When Kate confronts the sheriff, he harasses her, and tells her that Sam broke the law and deserved to die. Kate is wholeheartedly stung by the injustice and decides to avenge Sam’s death by becoming the outlaw Kissing Kate Barlow. It is believed she buried her vast stolen treasure somewhere in the dry lake bed prior to dying of a yellow spotted lizard’s venomous bite. Violence and racism are reflected in the language of the production – the words “negro” and “gypsy” are used to highlight these themes. If you have questions about these instances in the story, the 2003 film is a great reference. We also suggest you and your family talk about these themes prior to the play.

Over the years the town of Green Lake dries up and becomes the juvenile detention facility Camp Green Lake. The boys at Camp Green Lake are assigned to dig one hole each day five feet wide and five feet deep in order to “build character” and, unbeknownst to them, find Kate’s buried treasure. The boys in the camp do not always get along and have a tradition of bullying newcomers. The boys and their counselors use words like “fool,” “fat,” “dirty,” “rotten,” and “stupid” when talking about each other, sometimes in a joking manner, but other times with the intent to hurt or bully. Because this is a juvenile prison camp there are prop firearms on stage that when “fired” are augmented by a loud bang. All three story lines include different types of staged physical violence. Some examples are shoving, fighting, slapping, being hit with a shovel, and the fear of dying by venomous lizard bites. All physical violence is carefully choreographed and rehearsed multiple times before the show to ensure it is 100% believable for the audience yet 110% safe for the actors as they must be able to repeatedly perform the production.

This play is a great way to spark conversations about justice, prejudice, privilege, power, and family. Not all of the stories within Holes have a happy ending. Sam and Kate could not be together because the people in the community with power, like the sheriff, deemed their relationship unnatural or wrong. The powers-that-be at Camp Green Lake do the same thing with Zero and almost decide to let him die because he is an orphan and “no one would care.” These aren’t issues that are limited to the history books or fictional stories. Prejudice, injustice, racism, and the abuse of power are still problems in our world today. We hope this play will help your family have thoughtful conversations about these issues and how you can work to combat them in your daily lives.

We love this story because it is based on a fantastic young adult novel and is all about overcoming adversities and finding friendship, even in unlikely places. It reminds us that no matter your social class, the color of your skin, or your level of education, your fate is not set in stone. Sachar does not ignore history or try to fix it. Instead, his work touches on themes of responsibility, justice, prejudice, and friendship – themes which are so important for young audiences to learn and talk about. And we are not the only ones who love Holes; this literary classic has won the 1998 U.S. National Book Award for Young People’s Literature, the 1999 Newbery Medal for the year’s “most distinguished contribution to American literature for children,” and it continues to be well received by critics and schools internationally!