Lex Fun 4 Kids writer, Katie, enjoyed the latest show from the Lexington Children’s Theatre and has a great review! 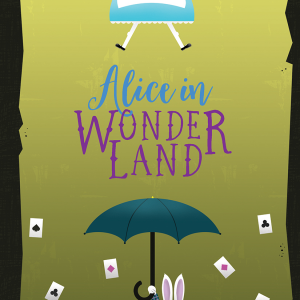 For ages 4+, grades preK+
Performed on the LCT Main Stage

Alice is positively bored. So bored, in fact, that this curious white rabbit is the most exciting thing she’s seen all day. Of course following the rabbit is her most thrilling option at this point, so she’ll follow the rabbit all the way down the… Join LCT down the rabbit hole with all of the fantastical flair (and umbrellas) only a Ms. Viv adaptation can provide!

“Have I gone mad?
I’m afraid so, but let me tell you something, the best people usually are.”
― Lewis Carroll, Alice in Wonderland

Yes, the best people are indeed a little “mad.” And if by “mad,” we mean “willing to let loose, embrace a character, and perform in a totally uninhibited way to the delight of young children,” then, the cast of Alice in Wonderland, is “mad,” indeed!

The four person cast is filled with talent and plenty of energy. Antony Terrell opens the play addressing the children in the audience, and he had us in the palm of his hand from that first moment. The children giggled, answered his questions, and listened intently as he took a quick phone call from his mother. His comedic timing was perfect. They adored him instantly. Annie Evans portrays Alice in such a delightful, little girl way. She’s entirely believable and a bit feisty! The white rabbit, Richard Yingling, was my son’s favorite character, and Lindsay Riddle brings to life a Queen of Hearts that is both fearsome and hilarious.

The scenery is simple, but brilliantly done. The tea party scene was my personal favorite. I am ever impressed by the creative ways the Lexington Children’s Theatre designs sets and props. The costumes were delightful as usual. Three of the cast members portray twelve characters. So, quick, simple changes to their costumes are essential in allowing the actors to move from one character to the next. The Queen of Heart’s dress and glasses were particularly fabulous!

While I enjoyed the play, my five and three year old were confused. We made a last minute decision to attend the play. So, I didn’t have time to frontload them with “Alice in Wonderland” information. This play is probably best suited for children in second to fifth grade. We went during a school performance, and the students to our left were probably third and fourth graders. They seemed to love it and understand the humor. The students to our right were preschoolers. They seemed restless and I heard lots of little voices asking questions.

My advice for parents with younger children is to do plenty of prep work before you go. Read the story, watch the animated movie, and explain that Wonderland is an odd and magical place where things are a little wild and a bit confusing. The dialogue moves quickly and during the scene with the Queen of Hearts they say “Off with his head,” quite a few times. My children didn’t ask. So, I let it go, but you might want to have an answer ready to explain that phrase! It’s a small cast. So, each person plays various roles. It would be worth mentioning that to younger children also. My son didn’t understand that concept.

Remember, stick around after the show to meet and greet the cast and get some photos and autographs!  That is always a great experience for kids and a way to enjoy a special keepsake.  Also, you’ll always find great tips for discussion in your show program!

Read Off Your Fines at the Lexington Public Library